Evaluation of Definite Integrals by substitution

When the variable in a definite integral is changed, the substitution in terms of new variable should be effected at three place

(i) In the integral,

(ii) In the differential, say , dx

(iii) In the limits

The limits of the new variable, say, t are simply the values of t corresponding to the original variable, say , x , and so they can be easily obtained by putting the values of x in the substitutional relation between x and t.  The method is illustrated in the following example 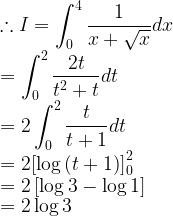 Which class you are presently in?
Choose an option. You can change your option at any time.
Class 6
Class 7
Class 8
Class 9
Class 10
Class 11
Class 12
You will be solving questions and growing your critical thinking skills.